This one has a freeze ray.

Large and often dangerous beasts have been pouring into our cities from lord knows what planet, flaunting their outrageous mutations and daring us to stop them.

Some say it’s a virus created in Switzerland ( a normally neutral country ) where it was injected Into cattle and exported worldwide. For a time the affliction remained bovine, then spread to pigs and horses.

Piggy back rides, in Bath!

A local strain has caused Alligators in my home town to walk upright. Pelicans elsewhere in the state have grown to unusual size and fish in the port city of New Orleans have started to walk about on land. 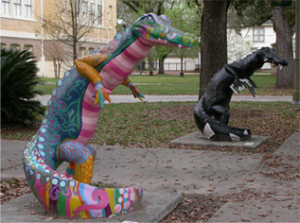 Tis’ the End of Days!

A recent incursion of Moose monsters out of Canada has roused new suspicions on the origins of this creeping surge which scientists have dubbed “Fabulosis”.

There are those that claim the creatures are but visions, manifestations of our deepest desires, marching out of the dreams of school children, the ambitions merchants and the minds of psychopaths. Appeals from animal rights organizations have spared these abominations, most of which seem innocent enough, though rumor has it some less G – rated specimens have been taken into custody.

This is the David Lynch cow. It has a right to remain disturbing.

It is also clear that many of the things have sold out, opting to sport corporate symbols rather then the honest work of the common man. 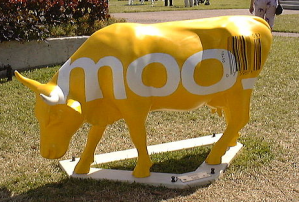 It wasn’t until 2004 that the Militant Graffiti Artists of Stockholm decided to stand their ground, saying that,

“We, the members of The Militant Graffiti Artists of Stockholm feel morally obligated to protect our city against the cows that have invaded our streets.”

And protect it they did, hostages were taken, fiberglass heads rolled – and a message was sent to ad-wizards everywhere that the right to besmirch Stockholm’s streets with garish schlock was a right that belonged to its people! 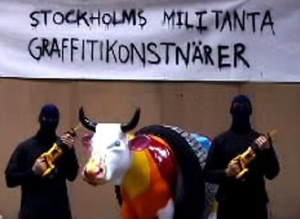 In light of the recent violence in Sweden, a race of bear mutants has banded together – throwing their paws In the air as if to say “Why can’t we all just get along.” They have traveled to various nations, standing in a circle and preaching their message of peace – but one wonders if there isn’t an ulterior motive. After all, one doesn’t see any other animals among them . . .

15 thoughts on “A Bohemians at Large Special Report!”